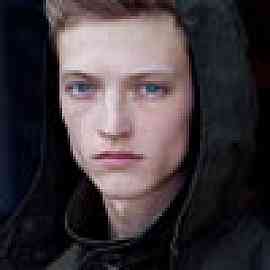 "I think of myself as a bad writer with big ideas, but I'd rather be that than a big writer with bad ideas." -Michael Moorcock With this simple sentence, Moorcock reveals something troubling and endemic to the fantasy genre: that not enough fantasy authors start out with fantastical ideas. There are a lot of big writers out there (with really big books) who don't have very big ideas. But perhaps that shouldn't surprise us, since their ur-inspiration, Tolkien, has a remarkably vast amount of skill sadly limited by a very small vision, while Moorcock is the opposite: a man with grandiose visions who is sometimes limited by his meager skill. Certainly, Moorcock is capable of some pretty, frilly prose, and shows in this story, as in the tale which opens Elric's saga, that he is capable of providing a consistent tone and driving plot. But, at his core, he is still (at least through the early Elric stories), a pulp writer, and he admits as much in the introduction to 'Stealer of Souls', talking about how many of the stories were rushed, how some were written for money, that many disparate stories were combined to make saleable novels, and how most of these stories were explorations of ideas that he would only fully develop in later series. I admit I appreciate this straightforward humility much more than the pretension of many in the genre, and as usual, it is the most humble author who tends to produce the best work--it is almost as if some level of restraint and self-awareness was vital to being a skilled writer. Though not all of his experiments work out so well, like Leiber, the earlier writing seems to have the most drive and vitality. While this dark, mythic vision of Ragnarok might be the conclusion of Elric's tragedy, it actually comprises some of the earliest stories. Like the introductory story of the series, this one has a consistent arc of plot and tone, and is much more concerned with Elric's psychological struggles than some of the others, where he is more standoffish and archetypally mythic. There is also an interesting crossover here between Elric's story and the historical myths that inspired him--namely the Song of Roland, and it is an interesting choice on Moorcock's part to create a literal connection to his inspirations instead of merely a symbolic, allusive one. It is another sign of his authorial inventiveness and boldness to delve suddenly into pastiche and give his mythic world a very real connection to his reader's reality. Once again, I am struck by the fact that, reading the entirety of the original Elric tales, I have grossed about eight-hundred-fifty pages, and in that space, have gotten a character's life: his several loves, many companions met, befriended, lost, and mourned, empires destroyed, mythical realms explored, and a worldwide war begun, waged, and concluded. In many other fantasy series, I might still be waiting for the plot to actually pick up. Already I have gotten a depth and breadth that exceeds many longer works, and that is despite the fact that several of the Elric stories are experiments that never quite concluded, and thus acted as filler. I know that Elric is not quite an 'Epic Fantasy' (though it does have some epic scope), but it seems to me that too few authors actually have enough ideas to actually fill a series the length of the average epic. Moorcock does have a wealth of ideas, many of them promising and unusual, and it's unfortunate that Moorcock never quite explores them all, though he has said that for him, the Elric stories were just the opening forays for concepts he would develop more fully later, and so I look forward to reading those later books and seeing how his promising concepts play out when he has the opportunity to put more time and thought into them. One complaint I had with the stories was that the interesting magical cosmology of the world never seemed to manifest in the characters, who tended to be more mythical than psychologically complex, and if, in the future, Moorcock is able to rectify this, it would deepen his fantasy immensely. The conclusion is impressive, and if all of the stories had the same drive, continuity of tone, and depth of psychology, it would be a much stronger series. As it stands, it is an interesting experiment, an exploration of fantastical concepts that, if not as focused as we might hope, at least present a unique, inspiring vision of what fantasy can be. My Fantasy Book Suggestions